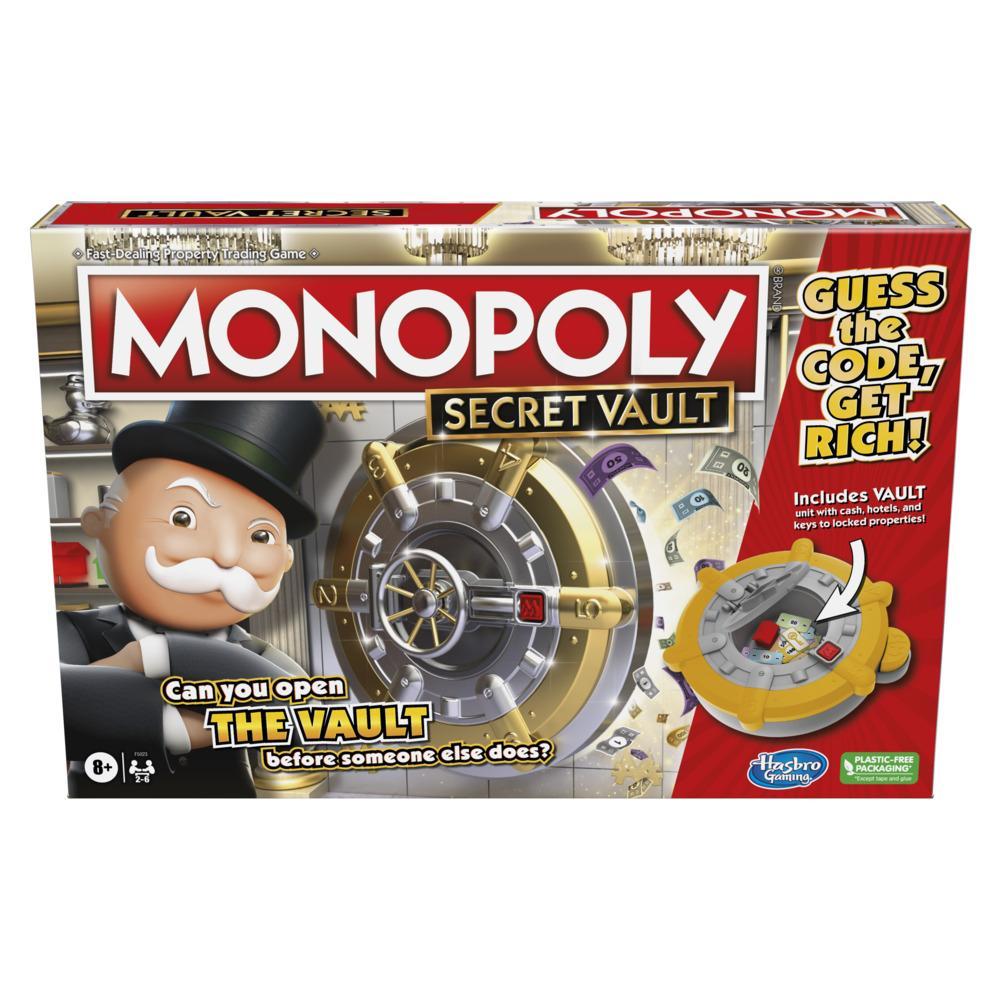 Guess the code and get rich! The Monopoly Secret Vault board game for kids 8+ features Mr. Monopoly's vault filled with valuable items that give players more wealth. Begin by filling the vault with riches. Each time a player unlocks it and gets the goodies inside, it gets refilled with more valuables. Which means there are always plenty of riches to unlock! To open the vault, players guess the code, which is a random number from 1 to 6. Be sure to pay attention to numbers already guessed! In this exciting family board game for 2-6 players, each time the vault is opened, the code randomly resets. Along with Monopoly Money, there are hotels that players can only find in the vault, plus 4 locked properties. The player with the most money at the end of the game wins! The Hasbro, Hasbro Gaming, Parker Brothers, and Monopoly names and logos, the distinctive design of the gameboard, the four corner squares, the Mr. Monopoly name and character, as well as each of the distinctive elements of the board and playing pieces are trademarks of Hasbro for its property trading game and game equipment.

•MONOPOLY GAME WITH VAULT UNIT: In the Monopoly Secret Vault board game, Mr. Monopoly gives players chances to take riches from his vault -- if they can guess the code to unlock it
•CRACK THE CODE AND GET RICH: Players buy properties and collect rent, but in this edition players try to guess the codes to open the vault as many times as possible
•FIND MONEY, HOTELS, AND KEYS TO LOCKED PROPERTIES: Inside the vault, find money, hotels, and cardboard keys that allow players to unlock properties that are only in the vault
•THEMED MONOPOLY TOKENS: Features tokens including Scottie, Top Hat, T-Rex, Hazel. Racecar, and Rubber Ducky -- all designed to look like they're ready to break into the vault
•ENTERTAINING FAMILY GAME: The Monopoly Secret Vault board game for 2-6 players is fun for adults, teens, and kids ages 8 and up. It’s a great choice for family game nights, parties, and get-togethers