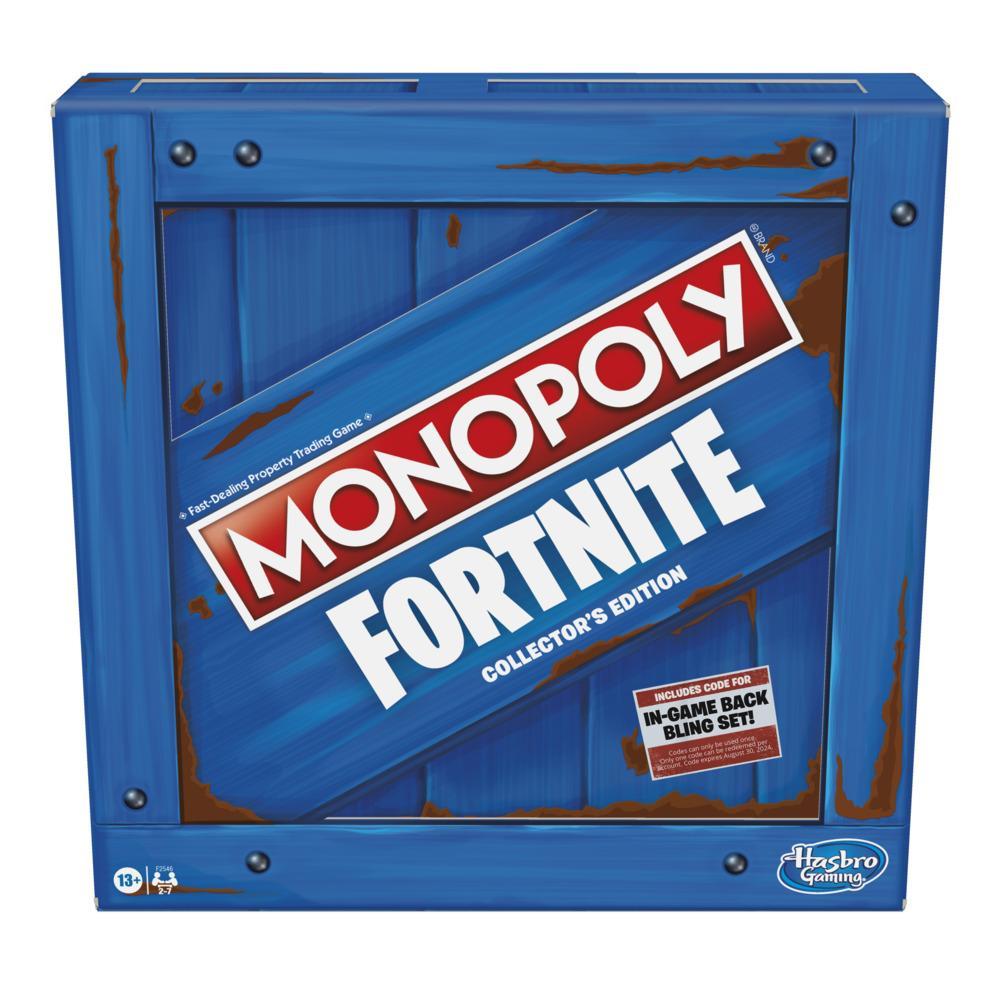 The Monopoly: Fortnite Collector’s Edition game has been reimagined for a Fortnite experience with Health Point chips instead of Monopoly money and Fortnite-inspired property spaces. With 10 zinc Monopoly tokens, players can choose to play as a favorite Fortnite character. Players make their way around the board claiming locations, battling opponents, and avoiding the Storm. The last player standing when all others have run out of Health Point chips wins! FORTNITE and FORTNITE (stylized) are trademarks of Epic Games, Inc. The Fortnite images, story elements, characters, distinctive costumes or "Outfits," and related designs © 2021 Epic Games, Inc. Fortnite and its logo are trademarks of Epic Games, Inc. in the USA (Reg. U.S Pat. & TM Off) and elsewhere. The Hasbro Gaming, Parker Brothers, and Monopoly names and logos, the distinctive design of the gameboard, the four corner squares, the Mr. Monopoly name and character, as well as each of the distinctive elements of the board and playing pieces are trademarks of Hasbro for its property trading game and game equipment.

•MONOPOLY: FORTNITE COLLECTOR'S EDITION: This premium edition of the Monopoly game features artwork, themes, and characters inspired by the Fortnite video game. Game is for teens 13 and up and adults
•EXCITING UNBOXING EXPERIENCE: Includes a code for an in-game Monopoly Back Bling set (Code can only be used once; only 1 code can be redeemed per account; code expires Aug. 30, 2024)
•INCLUDES 10 ZINC CHARACTER TOKENS: Players can choose to play as one of their favorite Fortnite characters; game includes Fortnite property spaces and Health Point chips instead of Monopoly money
•DIFFERENT WAY TO PLAY MONOPOLY GAME: The Fortnite edition of the Monopoly game isn’t about what players own; it's about how long they can survive
•BATTLE OPPONENTS: This game comes with 27 Fortnite Outfits with pawn stands for characters not featured in the previous Monopoly: Fortnite Edition game